Had a long night. The band playing in the lodge didn’t stop until about 1 am – pretty bad oldies Goldie’s garage band. Then, once the “music” stopped, someone turned on the radio. Meanwhile, with each passing hour the temp dropped lower and lower. I started out hot and progressively added layers through the night until I had my head under the covers and was shivering. At 6:00. am, I was ready to get out. But there was no where to go since the lodge and restaurant didn’t open until 8:00 am, so no coffee. Thankfully, at approx 6:45 I heard rustling and when I stuck my head out Randy was setting up the propane heater to boil water for the Starbucks via – happy! Even happier to find that my rear tire was still inflated and good to go.

We ate at the local cafe when it opened, and headed out for what was to be one of the the most grueling rides of the trip to date. I knew there would be two hard climbs over the highest elevations to date. However, I did not anticipate a constant strong headwind. You know it’s bad when you are pedaling downhill as hard as you can and only going 7-9 mph. The first ride to Big Hole Valley pass was a killer. Still, the scenery was stunning.
After reaching the first summit, we rode essentially downhill or flat against a headwind. Then up the second climb to the second summit. That was also a killer, and I did walk a portion of the hill. Along the way, we saw several other bikers coming from the other direction. 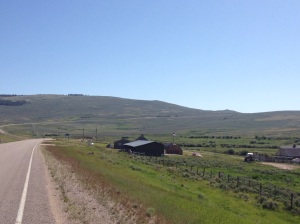 The clenched came when we started down the second summit and began the final 15-20 miles to Dillon. What is Usually an exhilarating ride down became an ordeal due to gusting cross-winds winds of 20 mph or more.  I clung to the handlebars and had to focus intently on the road ahead. It was a strenuous upper body workout just to keep on the road. And it seemed to go on forever. Plus, it was hot – almost 90 degrees. And I was already a little tired from camping. I will remember this as one of the most harrowing and grueling rides of the trip. Finally, finally we reached Dillon. I was exhausted. I found my room at the local Motel 6 and told the guys I would see them in the morning – they camped at the local KOA.

After checking in, I did laundry and shopped for snacks for the next leg of the ride. Then settled in happily in a comfortable bed after a good soak in the tub.

I am happy to report that the tire held up beautifully – no problems whatsoever. I told Randy that I would be really convinced after 2 or more days without a flat. I am loving Roger.