University of Texas/Austin student filmmaker Shelby Hadden made a film about Truth Be Told graduate Liz. Read Shelby’s blog post and watch the video below.

I pulled in the driveway of the rundown blue shack on the side of Highway 290, wondering if I was making the wrong decision jumping into the car of a total stranger — let alone into the car of a convicted felon. I had just moved to Austin, and it’s not like anyone would be checking in on me.

Earlier that summer from the comfort of my bedroom in Nashville, I scoured Austin newspapers and websites searching for a story. I knew I’d be making a documentary my first semester in the Film and Media Production program at the University of Texas. When I found Truth Be Told, I knew I had come across something special. I had just finished a documentary about an art therapy program for patients with Alzheimer’s and dementia, so I was very aware of the healing power of creative expression.

I contacted Truth Be Told and had a long conversation with co-founder Carol Waid. I instantly felt a connection through our shared passion for storytelling. As soon as my Austin apartment was unpacked, I met Carol for coffee. She got me in touch with a few Truth Be Told graduates as possible subjects for my film. Liz was one of them.

The night before we were supposed to meet, Liz called me with a change of plans. The only way we could talk was if I joined her for the drive to San Marcos to visit her parole officer. I was wary of this plan, but having seen how protective Carol was of her Truth Be Told students and graduates, I thought I could trust Liz.

The next morning, Liz greeted me with her beautiful, perfect smile and instantly put me at ease. There wasn’t a moment of silence during that car ride. She told me her entire story — what drove her to prison, her experience behind bars, and her hopes and dreams for the future. I was blown away by her honesty and vulnerability. I knew that I had to tell her story.

I packed my trunk with video equipment and drove to Dripping Springs at least twice a week from September to November. I was with Liz when she woke up her three children and drove them to school. I went to orthodontist appointments and lunches in elementary school cafeterias. I was back at that blue shack when the siding was re-done, the shelves lacquered, and the candy bins filled. I was there opening day to see Liz’s vision of The Sweet Spot become a reality. 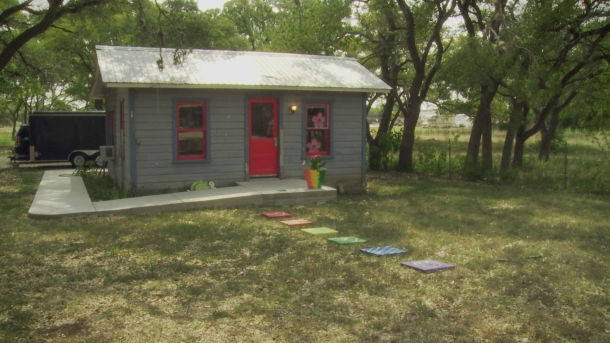 The Sweet Spot, before

I am so grateful for Liz and her family for opening up their lives to me. I will always look up to Liz for her strength and courage. She is living proof that each of us is more than just one decision or event, and that everyone has the ability to become a better person. I am proud and honored to call her my friend.

View more of Shelby’s work on her website, http://www.shelbyhadden.com/.

2 Responses to The Sweet Spot, a film about a TBT graduate's story